A downloadable game for Windows and macOS

Long ago, the continent of Terra was shattered by a great disaster separating the mortal races onto islands.  From that disaster 4 powerful island kingdoms rose: The Kavic Dominion, The Gestalt Republic,  The Valakan Federation, and finally The Kingdom of Alteria.

You are a citizen of Alteria, a prosperous kingdom with rich supplies of Fire Essence. While Alteria is currently at peace,  diplomatic tensions are building between Alteria and the Kavic Dominion. On the other hand, dark clouds are gathering as an ancient evil is returning to Alteria. More than ever the kingdom could use a hero, but who will take up that mantle? Follow the story of Cecilia and watch events unfold as she learns and sees if she has what it takes to be a hero!

In Hero Soul you can cast spells in addition to your normal attacks. As you play you will discover spell cards to add to your collection. You may then pick and choose which spell cards to use. Spell effects vary so experiment to find which cards suit your play style.

Spell cards can also be all cast at once, called "Burst Spells", which combines the cards being used into a new and devastating new spells!

There are many combinations of cards and many "Burst" spells so experiment!

The landscape of Alteria is always shifting, and no two levels will be alike. Experience increased replay-ability with procedurally generated levels, quests, and monsters! No level or run will be exactly the same and no story will be either! 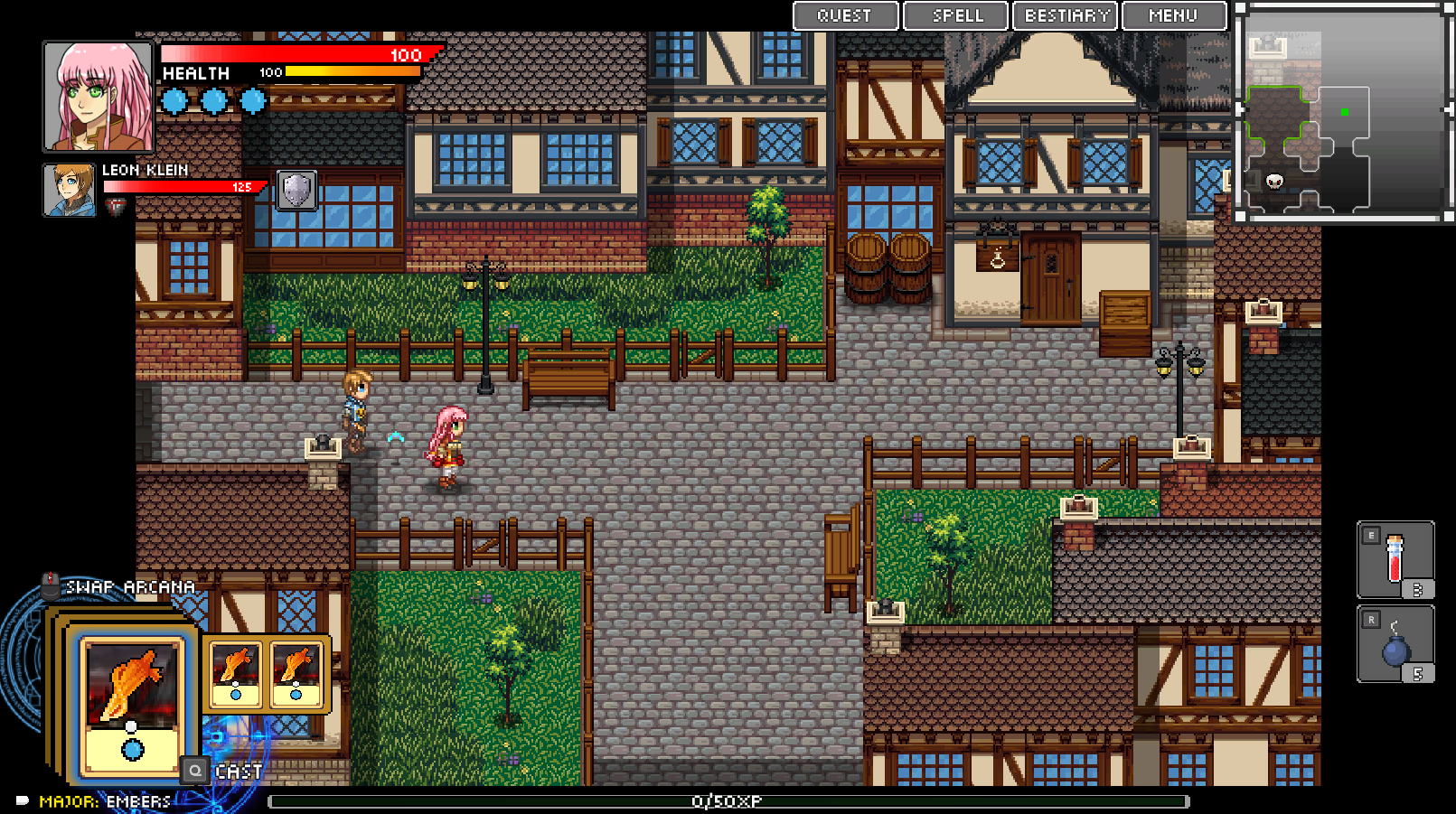 While the game's name is Hero Soul, the Hero Soul also refers to the modular talent tree system that handles your character's skills and talents. This system allows you to mix and match different hero archetypes to create your ideal hero. Heroes are are discovered randomly as you progress thorough the game.

Additionally, the choices you make as a hero will also impact the outcome of the game and the events that will happen during the game.

I've mostly worked on this project solo, but had a lot of help from some amazing people!

[Credits in progress, more to come as I add more]

Just a question: for the tilesets you're using, did you purchase non-RM licenses for them, since you're using them in Unity?

Also, noticed that Celianna isn't credited here (as of Oct. 15 2019, in case this page gets edited to include credit). She's the one who created the Ancient Dungeons tilesets, which I noticed were used in the intro animation. Not sure if this was something that just slipped through the cracks (that's happened to me too, it happens when you have a large list of resources you're using), but I figured I'd say something here.

Good catch. I did forget to credit them. Adding it now. Also, those tiles are from RM and are just being used as filler for now and will be replaced later on since I can't seem to find a way to purchase a non-rm version of the assets. Anyways thank you again.

Just be careful with that, doing stuff like that and getting caught could get you into some serious trouble.

For sure, I've actually have been going back and marking which assets need to be switched out to avoid any copyright issues when the game is released.

First of all, I wish to say thank you for developing a game that's similar to Secret of Mana (SNES version). Any games that have a similar style to it always catches my attention, and I wish there were more.

1. Leon seems to have trouble keeping up no matter where I am, whether in combat or not. He moves too slow, and I'm not sure if that's mostly for combat purposes or not.

2. I feel the AI should be able to use potions when their health is low.

3. I love that the AI fight their own targets, but it gets them killed when it comes to bosses.

4. Do the enemies return after awhile, or when you come back to that location on the world map? I admit that I didn't try out much and just finished the current demo to see what changed from the last demo I played.

5. Maybe it's just the nostalgia of my favourite childhood game (that I have yet to complete XD) that put the idea of it being a co-op game into my head, but as I continued to travel and fight enemies, I just thought that another player would be more helpful than the current AI. In Secret of Mana (for those that don't know), another player can join once you have another party member, allowing up to three players in total. So, along that line, your game could allow up to four-players once all characters are within the party, or just have it as a two-player co-op to make it easier. It's just an idea I wanted to suggest.

Honestly, no matter what you decide for the final release, I believe it will be awesome and I can't wait!

Hey, thanks for playing and the kind words! It really means a lot to me :)

In response to your comments:

1. He is slower by design. I tried to increase the speed of the AI and overall it looked strange. In combat however Leon's AI moves slower while his shield is up. However I agree he moves to slowly with his shield up, and will probably change this when I revisit his AI.

2. Good point! This is something I have also been wanting to do. I wanted the AI to be more reactive when it takes damage, such as dodging or retreating or even using potions. Again these changes are in the works!

3.  Yeah, right now the AI is kinda dumb... Working on making them smarter. Also looking into allowing you to revive them or pick them up if they do something stupid.

4. Enemies do not return in rooms you have already cleared. Essentially enemies are spawned when the level is being generated, so if you revisit the dungeon they should be enemies again.

5. Yes! This is something I want to do. I thought that the AI companion was perfect for Co-Op, but this is currently on the back burner for now while I work on the game and story. Think of Co-Op as the last thing I am thinking about putting in.

I haven't downloaded the game, but I love the art at the front page, can you make this an anime?? it looks super cool! downloading now!

I hope so! Thanks for the interest!

-Please provide a way for me to permanently mute the 'battle voices' during combat.  They are the most annoying thing ever.  Drove me insane in Freedom Planet (which is why I still haven't purchased it).

-Animations seem a bit stiff/plain.  Hopefully can be improved over time alongside other graphical improvements like spell-effects.

-I got a Water Anima spell but there didn't seem to be a way to swap spells out or let me actually see what it did.  Was a bit disappointed by that.

-Scrolling and screen transitions are jarring and unpolished.  Hoping this is improved in future versions.

-Please consider a toggle to disable screen shake as well as 'outline enemies' like the ones that hide in the corners behind the huge UI stuff.  Would love to be able to hide the UI or parts of the UI or resize it if possible.  Perhaps even have the UI dynamically resize itself based on resolution.

Thank you for your comments!

-Anything regarding art unfortunately will take some time. This game is currently a solo project and my expertise is mainly in the development programming side. Though I do agree with you, and would like better animations down the line

-Currently you are allowed to swap between levels, but I am considering allowing you to instantly equip newly acquired spells.

-I am already working on a solution to highlight enemies behind objects. As for the UI, I agree as well. The game's UI is currently locked on 800x600 resolution regardless of the game's resolution. I am looking into changing this in the future. As for screen shake perhaps can look into a magnitude slider since I am looking to add more settings to the setting menu.

Thanks for the feedback I appreciate it!

It is refreshing to meet an indie dev that takes feedback/criticism in a good way and is able to be honest about improving themselves.  Major kudos for that :)

I have at least 2 artists on my Discord server; one specializes in (3D) modeling/texturing but has some 2D skills and the other is exclusively a 2D artist.  They would need paid work, but if you are interested then feel free to join up in my Discord server and ask them if you like.

So, I just finished the demo and I thought it was pretty fun. I think any game that reminds me of PS2-era Action RPGs do that to me. Especially when calling out spell names, and the spell slots felt very Kingdom Hearts. Just some thoughts below:

Apologies for the wall of text.

Thank you for playing! In regards to some of the stuff you said,

1. Yeah, I've been having trouble making heavy attacks have a use. The main use of them, that is not seen in the demo, is that they are used to interrupt some enemies when they are doing combos or are invulnerable. I didn't want to just give them a straight numbers boost. I'll have to go back and reconsider. Oh, one thing to note too, is that you can charge the heavy while you use the light, though it will drain more stamina.

2. There are like rest sites between levels where spells can be changed. This is also where you can switch companions, vendor items, etc. Hmm.. it sounds like you were using a controller, there are still many glitches with that... >___> And yes LB/RB for controller is used to cycle.

4. Yes you get to pick a MC and the MCs you did not pick are available to you as companions. Each MC will have a slightly different story and choices available to them. Also, ultimately the choices you make may change events down the line in the story as well as influence the ending.

5/6. I wanted the forest to feel a bit cramped, and I can see how it could be annoying with a ton of projectile enemies. I am currently looking into diversifying the enemies that spawn and making them closer to what enemies are like in Secret of Mana and less of a bullet hell.  I am also looking into adding an outline or something for enemies hiding behind trees or bushes.

Again thanks for playing! 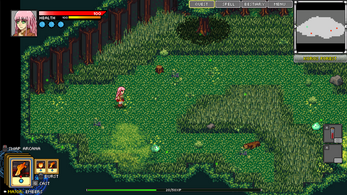 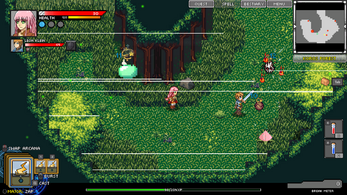 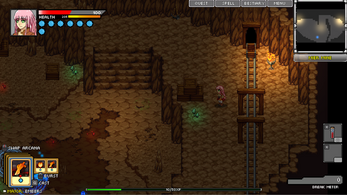 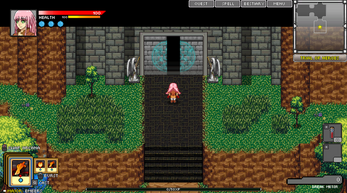 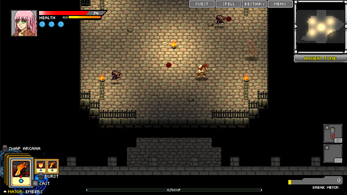 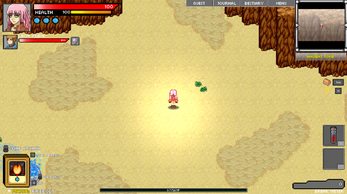 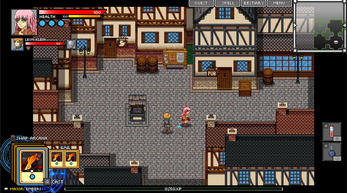 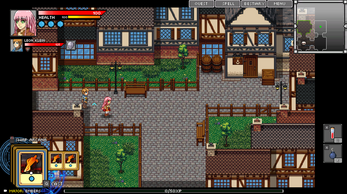 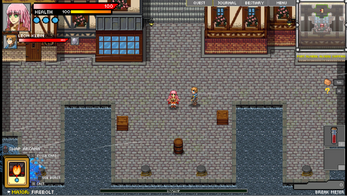 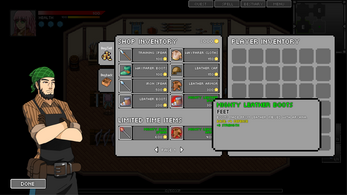 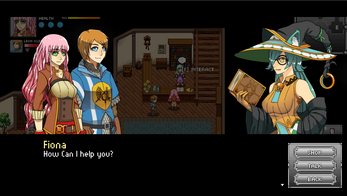